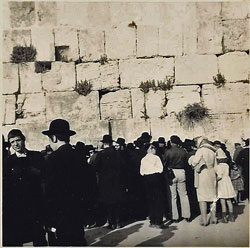 I’m an American who served with the Israel Defense Force in the Golan Heights during the Six Day War. A few days after the war ended, I was in East Jerusalem, which at that time was still under martial law. I immediately went to the Western Wall, which of course, we Jews had not been able to go to since 1948. At that time, there was no big plaza like today. Only a narrow street. It was jammed with soldiers and people, men and women, boys and girls together, praying, singing, so happy together. That’s right, men and women praying together at the Western Wall and you know what? It didn’t fall down. I enclose a photo I took at the time to prove it.

« Back to Taking Our Place homepage