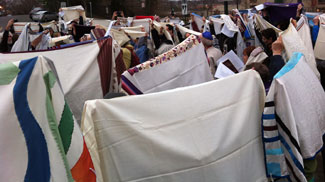 In the summer of 1989, at the age of 25, I celebrated my bat mitzvah at Jewish summer camp.

Growing up in Israel, reaching the age of mitzvot was marked by a meal with extended family in our home. In my secular Ashkenazi home, heavily informed by my mother’s kibbutz roots, religiosity was non-existent and any Jewish symbolism was limited to cultural holiday celebrations. Nevertheless, living in the States in the mid 80’s I reveled in my new ‘discovery’ of feminist Judaism, and let the deluge of Jewish feminist writing and creativity wash over me and carry me with it.

In 1989 I decided to have a Bat Mitzvah. As I stood before the camp ‘congregation ’ on the Shabbat morning of my Bat Mitzvah, in our rustic amphitheater/synagogue in the Santa Cruz mountains surrounded by Redwoods, I marveled out loud at the privilege of standing before them as the shlichat tsibbur, donning tallit and kippa, and leining Torah. This was not a given; I described how only a week before women attempting to pray at the Wall in Jerusalem were accosted by ultra-Orthodox men. One woman had been injured by a chair hurtled at her from across the gender barrier.

Later that evening, after havdallah, the camp director called me down to a meeting with the shlicha (Israeli emissary to the community). The camp director was ill at ease but the shlicha didn’t hesitate: what I had done was anti-Zionist and anti—educational; I had jeopardized the entire mission of the camp. Blindsided, it took me several moments to understand her contention: I had dared to criticize Israel in public; by speaking in favor of Jewish pluralism (Women of the Wall), and criticizing the ultra-Orthodox I had undermined the mission of this pluralistic Zionist summer camp.

Blinded by my tears and overwhelmed by a sense of injustice, I didn’t have the presence of mind to point out the irony—the shlicha, who self-defined as ideologically secular and couldn’t fathom why I would even bother to have a Bat Mitzvah, was defending the ultra-Orthodox. Conversely, I was labeled an anti-Zionist.

A year later, I stood for the first time with Women of the Wall at the Kotel for a Rosh Chodesh service. Serendipitously, I will there again next month for the rosh chodesh service celebrating WOW’s 25th anniversary, humbly and proudly joining those who for the last twenty five years have stood without fail for equality and justice. They were and remain the true Zionists.

« Back to Taking Our Place homepage