The unconscionable physical and verbal violence against women in Beit Shemesh and elsewhere have degraded the religious concept of tzeniut (modesty) by associating it with misogyny and oppression. Some Orthodox condemnations of that violence, by objecting to means while acknowledging shared ends, have added to that degradation. 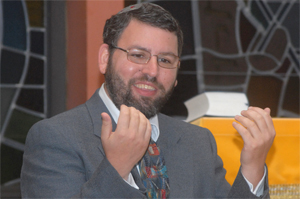 My purpose here is to directly reject the ends, in other words to offer a vigorously Orthodox and halakhic understanding of the purposes and parameters of tzeniut that opposes the goals and not just the means of those who seek to use tzeniut as a weapon to subordinate women or intimidate them out of the public square.

1. Tzeniut is a broad Jewish value whose practical expression is opposition to unnecessary and meretricious self-exposure, whether of the body or of the soul.  It relates to all people, male and female alike, and all of life.  Reducing it to a code for women’s dress and actions reflects an unhealthy obsession, equivalent to reducing love to an expression of (exclusively male) lust.

4. Tzeniut is one value in the complex web of Jewish values, which must constantly negotiate its place in that web.  It can be trumped, or attenuated, when it comes into conflict with other Jewish values.  From the halakhic perspective, once tzeniut is correctly defined as unnecessary self-exposure, it becomes clear that it should not be applied mechanically, but rather on the basis of a sensitive and dynamic understanding of the necessary.

Indeed, we need to recognize that Halakhah does not directly obligate women to dress or behave modestly [1], however that is defined.  Such obligations emerge instead via the obligation v’lifnei iver lo titen mikhshol – “you must not place a stumbling block before the blind” (Leviticus19:14). The Talmudic Rabbis understood this verse metaphorically as creating a covenant of mutual responsibility, with the specific consequences that Jews are responsible not to create circumstances that cause others to violate prohibitions, that preclude them from performing ritual obligations, or that distract them from the study of Torah.  Each of these consequences is readily conceptualizable as an obligation to respect the others’ space.

Now the “stumbling block” argument is always a potentially dangerous weapon.  Here is an illustration: The Talmud states that lifnei iver forbids fathers to give corporal punishment to grown children (Moed Qatan 17a), because this will cause the children to rebel and therefore violate their obligations to treat their parent with honor and reverence.  But what if children will rebel even when asked to perform minor household chores?  Worse, what if children learn this rule, and then give preemptive notice that they will disobey any parental command – does this effectively bar any exercise of parental authority?  If I tell my neighbor that if she ever cooks broccoli again, I will be driven to eat a cheeseburger – can I control her diet by claiming potential spiritual injury?

Now what constitutes a normal fulfilling life?  It should be clear that this is a sociologically dependent category.  In some societies it may be necessary to jog in public, but not in others; in some societies it may be necessary to sing in mixed company, but not in others; and so on.  It is likely that in each society, whatever is done habitually will have minimal erotic impact, and have minimal capacity to express intimacy.  None of these societies is intrinsically preferable according to Jewish law, so long as they are fully compatible with taking the obligations and values listed above with great seriousness.

Tzeniut is more easily implemented in a homogeneous society, where expectations of dress, behavior, and fulfillment are largely made by consensus.  It becomes much harder in a heterogeneous society, and harder still at the intersection of sharply distinct homogeneous cultures, where each side has difficulty even imagining why the other might see a particular behavior as an assault on psychological space, or conversely, as an infringement of normal human fulfillment.

But people of good will negotiate such situations while making every effort to find solutions that serve everyone’s interests.  By contrast, thugs beat up their opponents and try to make them leave or hide.  No one who properly understands tzeniut could believe that physical, psychological and emotional assault, i.e. violent intrusions on the space of others, are viable means of implementing the values behind it.  The thugs in Beit Shemesh should be condemned by all those who hold tzeniut dear, not because they are overzealous, but because their understanding of tzeniut is warped.

[1]  There is one possible exception: an obligation (probably for married women only) to cover (or braid or tie up) their hair. This requires a separate analysis. For a more extensive halakhic and textual treatment of the points raised in this article, please see the version found at www.torahleadership.org.