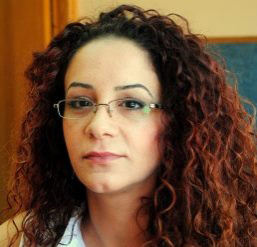 Since the outbreak of the conflict in Gaza, dozens of Palestinian Israelis have been fired from their jobs for expressing their opposition to the war on social networks. We spoke to Gadeer Nicola, a lawyer and coordinator of the Nazareth branch of NIF grantee Workers Hotline, to hear about the efforts to fight back and promote freedom of expression.

How big a problem is this? “We’ve been approached by dozens of Palestinian Israeli workers who have been fired because of things they’ve said on social networks, mainly Facebook. There are more every day. The problem has even extended to Arab students at academic institutions. At least 25 Facebook pages have been set up with names like “Not in our Schools” and “Exposing the Traitors” where people copy statuses of Palestinian Israelis alongside their photos and places of work, requesting that the general public call on their employers to fire them. Otherwise they threaten a boycott of their employers. Most of the cases we know about are a result of this pressure; in other cases Israeli Jews have read statuses of colleagues and then demanded their termination.”

What kind of things did people post? “Anything that doesn’t fall within the consensus is seen as a reason for firing. For example, there were some people saying that the IDF is committing war crimes, or posted pictures of dead Palestinian children, or people who took pictures of themselves with Palestinian flags at demonstrations. And there were some that were more extreme. They are seen as traitors because they are against the war. Employers have started issuing instructions that employees are banned from posting about the war on social networks (which is itself an infringement of freedom of expression), but it’s clear that this is being applied selectively…we haven’t heard of a single case in which a Jewish worker was fired for saying “Death to Arabs” or something like that, even though we know of many people who have done so.”

Is this legal? “Definitely not. The right to freedom of expression is fundamental. If there’s incitement, the police can get involved, but the law doesn’t allow an employer to punish workers for things they say outside of the workplace. Also – there’s been no warning at all, even for people who put up a post and then took it down because they regretted it. They were fired straight away. And there have been physical threats. The details on the Facebook pages often include phone numbers, and sometimes the employers made the workers stay at home because they said they couldn’t protect them. The government hasn’t issued a response, and no guidelines have been sent out to employers. The Employment (Equal Opportunities) Law clearly forbids firing workers because of their political opinions. At the moment this clause is being broken repeatedly.”

What is the Workers’ Hotline doing in response? “We’re giving legal advice and representation to fired workers. We’ve also written a position paper (with NIF grantees Adalah and Mossawa) explaining workers’ rights in cases like this. It has received more than 250 shares on Facebook so far, which shows how extensive the problem is. We expect that the first case will reach court in the coming days, and more will follow after that.”

Do you have a final message that you want to share? “We need to guarantee freedom of expression. It’s the most basic right citizens have in a democratic state. Employers shouldn’t be able to punish workers because of their political views, as clearly spelled out by Israeli law. For years we’ve been working to increase the number of Arab workers in Israel – this deterioration is taking us back years. We are working as hard as we can to make it stop as soon as possible.”