As the selection of Israel’s next chief rabbis approaches, New Israel Fund grantees, including those representing key Orthodox constituents, are drawing attention to the racist and exclusionary views of some of the candidates.

Much of the work has surrounded the candidacy of Rabbi Shmuel Eliyahu, the Municipal Rabbi of Safed. As has been well-covered by the Israeli press, Rabbi Eliyahu has made a series of racist and inciting remarks against Israel’s minorities: “agricultural theft is ideology for Arabs,” “as soon as you give an Arab a place among us, it takes him five minutes to begin doing whatever he wants,” and “driving Arabs out of Jewish neighborhoods is strategic policy.” 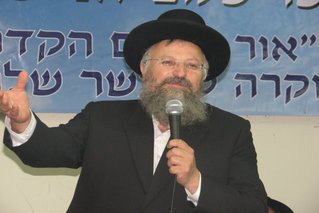 Rabbi Eliyahu notoriously issued a rabbinical edict in 2011 pronouncing that it was against Jewish law for Jews to sell or rent property to Arabs.

The NIF-supported Tag Meir Coalition has written an open letter to Rabbi Eliyahu, calling on him to withdraw his candidacy. Signed by 38 organizations, the letter declares: “Your racist attitude towards minorities in the State of Israel doesn’t only call into question your standing among Diaspora Jews (themselves living as minorities) but also stands opposed to the important Jewish values of respect for the other, pursuing peace, and tikkun olam. Fundamentally, these are values which are dear to Jews in Israel as well.”

Flagship NIF grantee the Association for Civil Rights in Israel (ACRI) Attorney Avner Pinchuk said: “It is intolerable that a senior state employee uses the standing and prestige of the position granted to him by the country to humiliate and degrade people and trample on their dignity and basic rights. This is true for the position of Municipal Rabbi of Safed…and it is baffling to think that this behavior is being reinforced by attempting to nominate him to be Chief Sephardic Rabbi. Even if Rabbi Eliyahu were to apologize, as he has done in the past to escape criminal charges [for incitement] the thought of him being appointed as Chief Rabbi of Israel is a horrifying prospect.”

Mavoi Satum — an NIF-backed group that defends women’s rights in religious courts — has called on the attorney general to invalidate the candidacy of Rabbi Avraham Yosef. Rabbi Yosef opposes the right of women to serve as municipal mayors, forbids women to speak in front of men, and has ruled that Jews are forbidden from selling real estate to non-Jews.

A letter signed by Mavoi Satum and two other NGOs to the attorney general made the case that “the views of Rabbi Yosef in general, and his approach to the status of women specifically, are problematic and are inconsistent with a modern worldview of a democratic society.”

Israel’s Chief Rabbis, one each for the Ashkenazic and Sephardic communities, are appointed for ten-year terms. Rabbis Eliyahu and Yosef are two out of the seven candidates for the position of chief Sephardic rabbi. The successful candidates in what has become a highly-politicized competition will be appointed later this year.