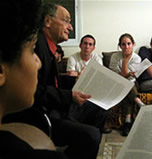 One would think that, having finally achieved a Jewish homeland in Israel, Jews could practice their religion – or not – untroubled by government interference.

To some extent, that’s true. In Israel today Jews of all types are connecting or reconnecting to their Judaism, in programs supported by the New Israel Fund. Immigrants from the former Soviet Union are setting up vibrant spiritual communities and discovering their Jewish heritage. Liberal Orthodox women are finding ways to increase their role and involvement in Jewish religious ritual within the framework of halacha. Young secular Jews are flocking to new schools combining study of Jewish texts with social action inspired by Jewish values.

But much remains to be done. The ultra-Orthodox establishment that controls Israel’s civil sphere continues to exclude other streams of Judaism on issues ranging from marriage to conversion. Although non-Orthodox Jews comprise 70 percent of Israel’s population, a tiny percentage of the budget for Jewish culture and education is allocated to Reform, Conservative, Reconstructionist and other streams of Jewish learning. Many non-Orthodox Israelis feel disconnected from Orthodox Judaism and develop a profound resentment of religious coercion, leading some to reject their Jewish identity in favor of a solely national affiliation. Moreover, religious extremism too often joins forces with extreme nationalism, to the detriment of democracy and to the pursuit of peace.

The New Israel Fund believes that a tolerant Israel will be a more socially cohesive Israel – within Israel itself, in its connection to Jews in the Diaspora, and in its relationships with non-Jewish citizens and neighbors. Work with us towards the ideal — one nation on earth, with all members free to conduct their religious, spiritual and cultural lives according to their own conscience.