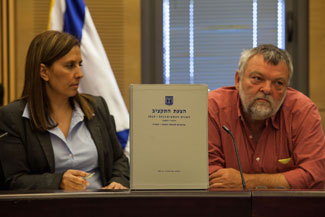 At a time when the Israeli-Palestinian conflict is, once again, taking center stage, it is easy to forget that the impetus behind Israel’s recent parliamentary elections was an economic one. And a SHATIL-led Forum has had a significant impact on the recent federal budget, rendering it more progressive in terms of both spending and revenue.

Last October, facing public demand for social change and fearful of the political backlash likely to follow planned spending cuts and tax hikes, Prime Minister Benjamin Netanyahu chose to dissolve the Knesset and call early elections, rather than reach agreement with his coalition partners on an austerity budget.

In the period since the Prime Minister’s decision, NIF/SHATIL has led a collaborative effort to transform the way Israeli politicians approach fiscal policymaking. The Social Budget Forum, a broad SHATIL-coordinated coalition of more than 30 social change organizations, many of which are NIF grantees, launched a campaign aimed at persuading politicians to take social objectives into account before voting on a financial plan that would burden countless Israelis.

In addition to coordinating the Forum, SHATIL staff also coordinated its four workgroups, led media and advocacy campaigns, employed innovative lobbying techniques and facilitated cooperation between member organizations. SHATIL was also able to contribute its knowledge and experience working with underprivileged groups, such as Ethiopian immigrants, to highlight the negative impact the budget would have on these communities.

In the run-up to the elections, NIF provided funds to Forum members for three conferences; and as the new government began deliberating its financial plan, NIF provided two additional emergency grants to organizations opposing the government’s plan to reduce child tax breaks.

“We realized that the deficit posed a substantial challenge and that the government had no choice but to make difficult decisions,” SHATIL consultant Eran Klein noted. “However, we were adamant that these decisions be the least harmful to Israel’s underprivileged citizens.”

In the period leading up to the elections, the Forum urged candidates to present detailed financial plans for which they could be held accountable. And prior to the budget vote, activists put enormous pressure on political representatives, organizing conferences in the Knesset, conducting an online campaign, and publishing policy papers.

Last Tuesday, the Knesset voted to approve a national budget for the 2013 and 2014 fiscal years. Although the final version of the budget is far from perfect, it does include a number of important modifications that can be attributed to the Forum’s work. The government agreed to create additional income tax brackets, cancel tax hikes on healthcare and housing, and cancel plans to raise social security rates for homemakers. To compensate for these decisions a number of revenue- generating alternatives, such as the Forum’s proposal to increase corporate tax rates, were adopted.

In addition to the progressive tax modifications, the Forum succeeded in instilling a new approach to budgetary legislation. Lawmakers across the political spectrum have recognized the importance of setting measurable social objectives as part of the legislative process. In fact, Meir Cohen, Israel’s Welfare Minister and an important member of Yair Lapid’s Yesh Atid Party, is chairing a new parliamentary committee established to set future social objectives. Looking forward, NIF/SHATIL will continue building on the Social Budget Forum’s work so that in 2015 Israel’s budget will truly reflect the social needs of its citizens.