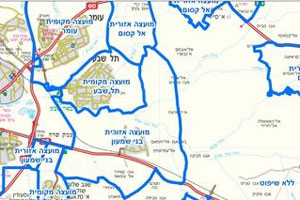 Following a petition from flagship NIF grantee the Association for Civil Rights in Israel (ACRI), the Interior Ministry has announced that an Arab representative will be added to the three committees set up to examine the municipal boundaries in the Negev. The municipalities with more industry or trade within their boundaries receive more tax revenue, which allows them to create a flourishing municipality. Residents in these municipalities enjoy a high level of education, welfare, health, and culture. Today, regional councils hold most of this territory, as opposed to development towns like Dimona, Yeruham, Kuseife, and Ar’ara, which border the municipalities but don’t receive the same benefits from taxable income.

In July, the Interior Ministry announced the creation of three committees to examine the municipal boundaries of the regional and local councils in the Negev and their respective control over “revenue generating” regions that house industrial zones, tourist attractions, and infrastructure. The committees were commissioned to recommend changes to the councils’ boundaries that will facilitate more equitable distribution of revenues among the different councils of the Negev. Seven members were appointed to each of the inquiry committees, but none of them was Arab.

ACRI argued that this constituted a violation of the right of equal representation for Arab citizens in public bodies and committees. The regions include Bedouin townships, as well as other Arab communities. These communities are consistently ranked at the bottom of socio-economic indicators. All lack industrial zones or tourist attractions, and most do not have land reserves for future development and expansion. A large percentage of the residents of these towns live in poverty and receive tax subsidies, further weakening the local revenue base.

ACRI Attorney Nisreen Aylan said: “It is nice to discover that in this case the Minister of Interior was receptive to criticism and even acted to change the situation. I hope that gradually more and more government offices will come to terms with the importance of equal representation of minorities and disadvantaged groups – like Arab and women – that have been excluded from the corridors of power and decision making for decades; and moreover, that they will adopt an organizational culture that takes into account the particular interests of minority groups that have suffered from discrimination.”