A Different Approach to Israeli Poverty

1 in 3 Israeli children live below the poverty line. An appalling statistic for a country whose economy continues to soar, yet the poor just get poorer. 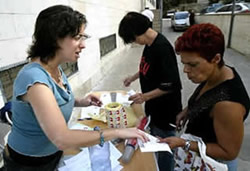 Field activists hand out information about the
rights of those participating in Israel’s Mehalev
welfare-to-work program.

Poverty, youth-at-risk, social unrest and despair go hand-in-hand. A nation founded on the traditional Jewish concern for the less fortunate, and on a strong sense of social solidarity, is fracturing along socio-economic fault lines. Since the social safety net was largely dismantled in the late 1990s, income inequity has grown to the point where the gap between rich and poor is the largest among all developed nations – except for the U.S.

Many organizations provide tzedakah – charity – to the chronically underprivileged sectors of Israeli society.  But only the New Israel Fund works on the root causes of poverty – giving a voice to the voiceless by building and strengthening social justice organizations the length and breadth of Israel.

Our task is huge. The 2006 Lebanon War exposed the growing gap between Israel’s prosperous center and its impoverished periphery. From the Galil to the Negev, and from urban centers to isolated development towns, NIF is assisting single parents, the elderly, Israeli Arabs, new immigrants and Mizrachim to make their case, and win the victories they deserve.