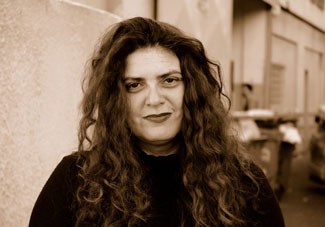 “The focus in other feminist organizations was on glass ceilings in big companies and the Israel Defense Forces,” says Shula Keshet recalling why she founded NIF grantee Achoti-Sister for Women in Israel in 1999. “But most of the women who are suffering in Israel aren’t even close to the glass ceiling. Achoti provides an alternative.”

Keshet was inspired to become an activist by her grandmother, Hana Kalaty. As a new immigrant from Iran, she established the House of Mothers to provide for the needs of poor women in south Tel Aviv. Using the model of the JNF’s blue box, the group raised money to help women, gave interest-free loans, and in the 1950s set up community centers. Keshet visited these places as a young girl. “It was the first time I understood the importance of feminist, Mizrachi, communal activism,” she reflects. More than 50 years later, by establishing a center for Achoti in South Tel Aviv, Shula closed the circle.

With the glass ceiling so far away for most of its clientele, Achoti focuses on basics. The organization was founded in 2000, and is now active throughout Israel. “It’s a very unique organization that struggles for equality using activism and creativity.”

Achoti’s focus is on empowering women through economic initiatives. Among its many projects, Women Cooking Up a Business was the organization’s first initiative, a women’s catering business in Jerusalem. Today the organization runs communal kitchens in Jerusalem together with partners Kol Ha’isha and Ehete center in Kiryat Gat for Ethiopian women, as well as Israel’s first Fair Trade store, which is located in Tel Aviv. They also run courses to help women set up their own businesses.

The Achoti House in south Tel Aviv is located in what Keshet calls “one of the toughest neighborhoods in Israel.” It’s the center of clashes between veteran residents and African asylum seekers. The neighborhood is blighted by drugs and prostitution, and the infrastructure is neglected by the municipality. “The situation of women in the neighborhood is even more difficult,” Keshet says. “When you’re in distress even a small thing can help.” Achoti activists try to help local women as much as they can, for example a single mother who wasn’t receiving the child payments she was entitled to because of a bureaucratic oversight. Another example is that of a woman who was going to be thrown out of her home because of a $550 debt. The activists organized an event to raise money for her. Achoti also supports the Power to the Community initiative, which brings veteran residents and African asylum seekers together for what Shula calls “the impossible meetings.”

Achoti House also has a cultural focus. In 2009 the My Heart is in the East coalition was established to confront the neglect of Mizrachi and Arabic culture in Israel. Studies show that 90% of the current culture budget goes towards teaching Euro-centric and Western art. The coalition, of which Achoti is an active part, works to confront this imbalance through cultural initiatives of its own. In response to Tel Aviv’s White Night celebration, which neglected the south of the city, Achoti organized Black Night highlighting local women and Mizrachi artists. Unfortunately, the police came and closed down the event, during which time a woman was sexually assaulted and the windows of Achoti House were smashed in. “The authorities treat the residents of poor neighborhoods like criminals,” Shula says, before noting that one of the policeman had called the center a “ticking bomb.”

In 2007, Haaretz’s financial newspaper The Marker chose Keshet as one of Israel’s 40 most influential women for social change. She won the NCJW Jewel Bellush Israeli Feminist award in 2011 and this year she was one of 10 women given the Rappaport Le’Isha magazine award for being about change.

It’s clear that the combination of culture and political activism is a potent combination. Achoti is providing vital support to some of the most neglected communities in Israel. Keshet’s grandmother would be proud of her.