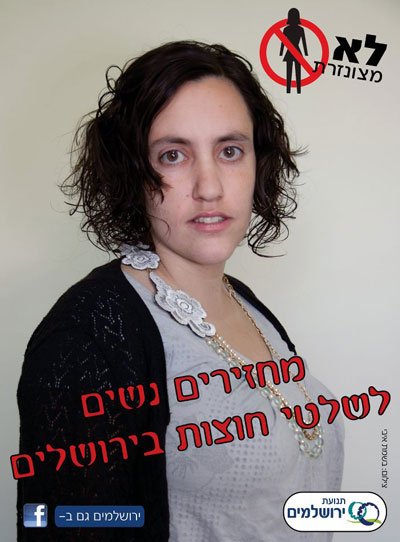 I was delighted to take part in promoting public awareness for preventing the exclusion of women in public spaces in Jerusalem specifically and Israel in general. My name is Roni Hazon-Weiss, 28 years old, Jerusalemite, married to Nachi and mother to 9 month old Yuval, a teacher and educator at the Givat Ronen school in the Katamon neighborhood of Jerusalem, studying for my Master’s in Talmud and Halacha and Women’s Studies at the Schechter Institute.

In addition, I am a social activist in the “Yerushalmim” (Jerusalemites) movement, and a board member of Ne’emanei Torah vaAvodah. I joined Ne’emanei Torah vaAvodah in order to take a part in changing the national religious community in Israel. The movement – which was established in the 70s – seeks to critique the Orthodox community and to present an alternative Jewish, religious, Halachic perspective on issues relating to religion and state, democracy, education, and the status of women. We work to prevent the growing extremism in the religious community. The movement is active in both spirit and deed.

As part of my social activism, I participated in Yerushalmim’s campaign, “[Women] uncensored – men and women fighting against the exclusion of women in the public sphere”.

When Rabbi Ayalon invited me to participate in the campaign, it was clear to me that I needed to take part in this initiative: as a woman, a mother, a teacher, a Jerusalemite, and an Orthodox person. Participation in the campaign was the beginning of the activities to return women to the public sphere, whether on billboards or as a part of ceremonies, cultural events, and the like.

The sense that Jerusalem is slipping through our fingers prompted a personal and public realization that shaping Jerusalem’s character as a pluralistic capital is in the hands of the general public. It’s in the hands of the majority to which I belong as an Orthodox woman. We now know that we cannot continue to compromise on our values in the name of the “public sensitivities.” After all, we too have feelings. We must therefore stress to everyone the value system by which we live. As a religious woman it was important to me to take a part in the campaign in order to say that there is another Judaism, that this is not the Judaism I grew up on, and that I have a place in Judaism as a woman, both in the private and the public sphere.

As a teacher, I was able to bring this value system to the classroom, to the boys and girls whom I teach. The poster campaign began while I was on maternity leave. When I returned to school, my students asked me about it.

I could feel that my presence in this campaign increased the sense of belonging, and of pride, among my students. It triggered a deep discussion on values, on feminism, on activism, and on the difference between public and private spaces

The campaign began by hanging huge posters from the balconies of private homes, coffee shops, and cultural institutions facing the street. The second stage was to place posters on billboards throughout Jerusalem. The advertising company we approached told us that we were crazy, that all our signs would be destroyed, that it would be a wasted effort. To my delight, they were wrong. Some posters were vandalized, but most were not.

The campaign proved that we should not be afraid. In the wake of our efforts, advertising agencies and cultural institutions, such as the Jerusalem Theatre, found the courage to include women in different ads around the city.

I choose to emphasize the fact that I am an Orthodox woman who is active in Ne’emanei Torah vaAvodah in order to convey that the censorship, the growing extremism, and the obliteration of women from public spaces is not the true face of Jewish Halacha, but the view of a radical minority which has taken hold in recent years and which has no basis in Jewish law. As part of my activism, it is important to me to show a different Halachic perspective, to work to advance gender equality, and to make women’s voices heard.